The Inclusive Sacramental Church of Christ

Get to know our clergy 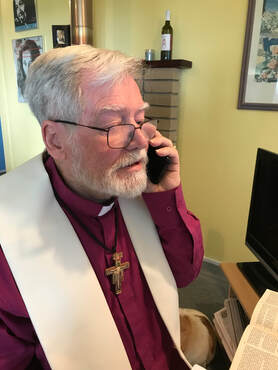 Our Presiding Bishop
Rt Rev Harry Aveling
St Francis & St Clair Mission, Notting Hill, Melbourne
​
Harry Aveling was ordained to the priesthood of the Liberal Catholic Church in March 1986 and incardinated into the Liberal Catholic Church International in December 2002. He was appointed Vicar General for the Province of Australia in 2004 and consecrated to the episcopate in April 2017. As Regionary Bishop, he had oversight of the Church within the Commonwealth of Australia.

​The Inclusive Sacramental Church of Christ was founded on the 13 March 2021. As presiding bishop, he currently has oversight of parishes throughout the world. He holds degrees in Arts (PhD, Malay Studies, National University of Singapore), Creative Writing (DCA, University of Technology, Sydney) and Theology (STM, Wollaston College, Perth WA). He has recently served two terms on the Committee of the Association for Supervision and Clinical Pastoral Education of Victoria.
​ 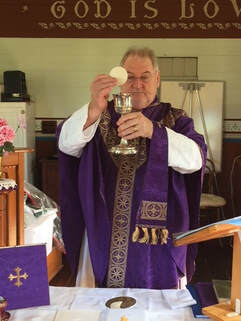 When David and Vicki were teenagers, planning their lives, Vicki said to David ... you should be in Holy Orders.  It took another 39 years for this to happen, with David being ordained a Cleric in the Liberal Catholic Church in May 2010, and finally as a priest, on August 11th, 2013, under the hands of the Right Reverends Graham Preston, Allan Bradley and James White at the LCC Parish of St Alban in Brisbane.

Throughout his time in Orders, David has (not-so) quietly agitated for equality in the delivery of our Sacraments ... such that all seven of the gifts of the Holy Spirit are offered to any and every person, regardless of gender or lifestyle, as long as they approach same with due reverence and respect, and this led him to leave the Liberal Catholic Church in May 2020, and join the Liberal Catholic Church International, founding the Community of St Raphael the Healer with his wife and Deacon, Vicki and the two of them conduct the service of the Mass each Sunday at 9.30AM at their home in Brisbane.

Like all clergy in Liberal Catholicism, David works a full time job as well, and over his life, has been involved in photography, home improvement construction, publishing and advertising, where he has worked for the last fourteen years with an Australian publication.

Vicki Jones was ordained to the priesthood on Sunday 30 January 2022.
​
When they were teenagers, Vicki said to David ... you should be in Holy Orders, and he was ordained a priest 42 years later.  And while Vicki had been wholly supportive of him, she’d not really thought she’d have a vocation until she saw David growing into his role as a priest.  However, Vicki was not interested in a role as a deaconess in the Liberal Catholic Church, as such is a religious order, but not a bible-based Holy Order.

So Vicki left the LCC, and started working towards orders under Bp Harry Aveling of the Liberal Catholic Church International, a church with the same amazing Liturgy and same values, but  which would extend to her the same rights to serve Our Lord in Holy Orders as were afforded to her husband David in the LCC.  Vicki was ordained to the Diaconate in October 2019 under the hand of Bp Harry Aveling at a service in Brisbane attended by some thirty family and friends. 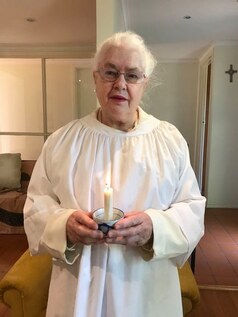 Marion Gilchrist was ordained to the priesthood on Sunday 30 January 2022.

Marian Gilchrist was admitted to the Order of Deaconess in the Liberal Catholic Church, Melbourne in 1989.  She transferred to the LCCI two years ago and after passing through the minor orders was ordained to the diaconate in December 2020.  She has a long experience of, and knowledge about Liberal Catholic principles and practice, and also holds high degrees in co-masonry.  Marion is a musician. As a deacon, she is particularly concerned with church outreach and welfare work, and hopes to be increasingly involved in the work of the altar.
​